The château of Chambord is one of the most unique Renaissance constructions to be seen and visited today.

Notwithstanding the extraordinary renown of the château of Chambord and the interest it has aroused among historians over the centuries, the identity of its architect has remained an enigma. The mystery is compounded by the nearly total absence of archival information pertaining to the royal construction site, of which the records were dispersed or destroyed at the end of the 18th century.  No plan, no text contemporary to its erection provides a precise indication of the name of whoever originally imagined and sketched out the defining features of one the most remarkable Renaissance edifices.

The influence of Leonardo da Vinci

Even though the exact identity of its architect remains unknown, the château of Chambord is undeniably an exceptional achievement, influenced by the work of Leonardo da Vinci.

Following the Battle of Marignan, François I discovered the marvels of Italian architecture and, more specifically, the work of Leonardo da Vinci. When he returned to France (in 1516), he invited the polymath genius to sojourn in the French court as “premier painter, architect and engineer of the king”.

Leonardo’s influence in drawing up the Chambord construction project is displayed when comparing the architectural orientations adopted in Chambord with the sketches in his notebooks. The center-plan design of the keep, the double helix staircase, the double pit evacuation system with its air duct and the sealing system on the terraces are telltale indications that reveal the role of Leonardo as the brain behind the work of François I. 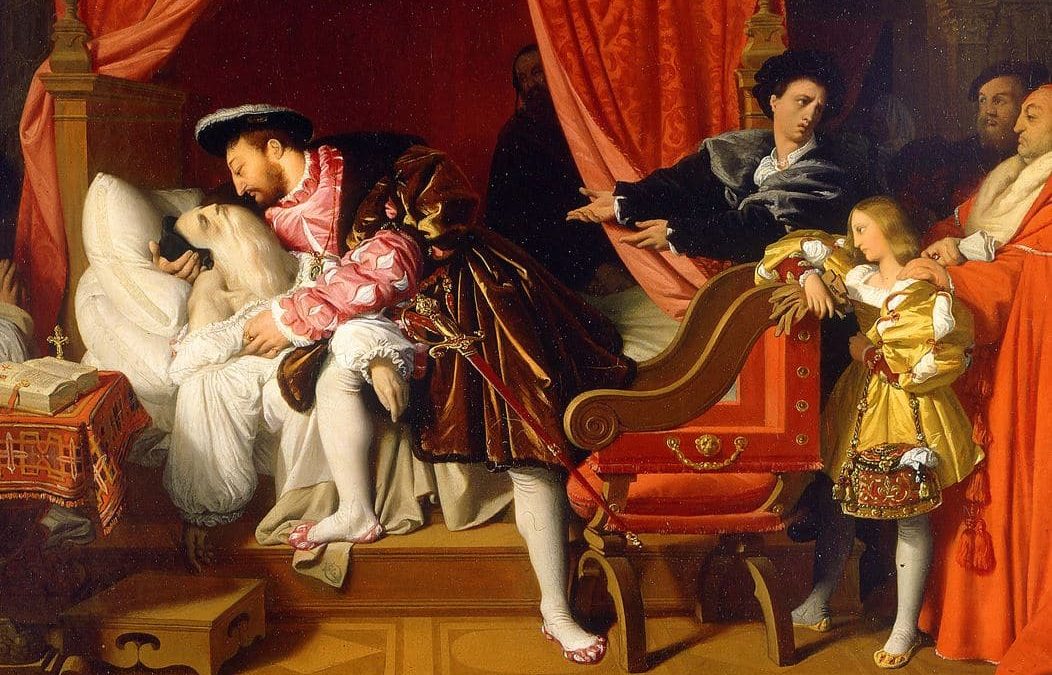 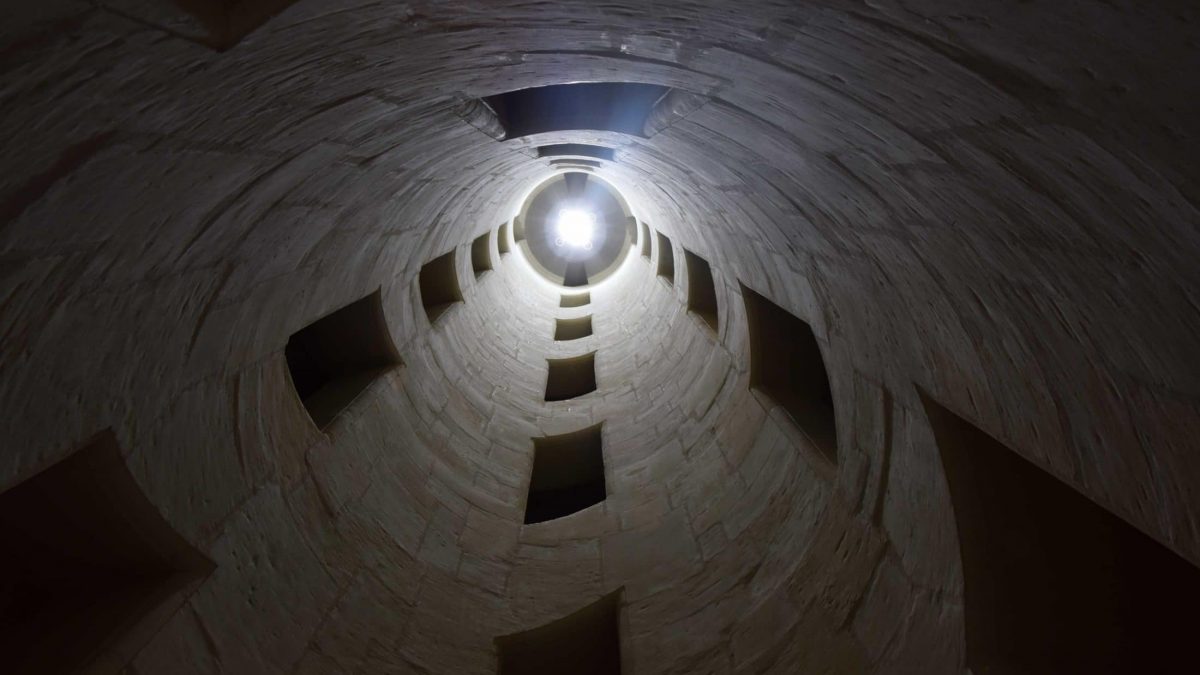 The central section of the château of Chambord is the keep, otherwise known as the donjon.

The square building delimited by four corner towers occupies the center of the present-day complex. When construction work began, it constituted the new palace of François I. It was only in or around 1526, date marking the return of the French king following two years of captivity in Madrid subsequent to military defeat in Pavia, that the edifice was complemented by two lateral buildings and an enclosure marking off the court.

The internal composition of the keep is laid out in a way never previously seen in France and presents an undeniably “Italian” aspect. It features a Greek cross-shaped centered design; the four sides of the building open up onto spacious rooms (9m wide and 18m long) forming a Greek cross. In the center rises the monumental double helix staircase. Last but not least, the cross-shaped room delineates in its angles the living quarters composed of standardized apartments.
The ornamentation of the upper parts of the keep and the château, which are riddled with chimneys and stairway turrets, recalls the stylistic peculiarities of fortified castles.

However, when the Chambord château was under construction, these traditional forms of medieval architecture had long since come to be considered as obsolete. Indeed, advances in artillery meant that by the mid-15th century, fortified castles had outlived their usefulness. That said, the persistent survival of medieval architecture in the Chambord château should not be attributed to a mistaken notion that the builders were somehow “behind the times”. Take a close look at the keep, at its corner towers, its enclosure, its moats with their water, and you will see them bringing back to life a form of military power that may no longer be real, and is emphatically allegorical. More than thirty years after the construction of the last fortified castles was completed, these features serve as unmistakable architectural citations of bygone times. In the eyes of the contemporaries of François I, they conjure up recollections of a declining universe of chivalry, universe to which the young sovereign, who was the last chevalier king, remained nostalgically attached.

The “magic” staircase of the Chambord château

The château features a staircase of which the layout is as remarkable as its positioning in the edifice. It was placed in the very center of the keep, where four spacious rooms converge. It is composed of twinned helical ramps twisting one above the other around a hollowed out, partially open core. The so-called “double helix” staircase services the principal floors of the building, all the way up to the crowning terraces, which are topped off by the tallest tower of the castle, the lantern tower.

Ever since the 16th century, the staircase has continued to fascinate château visitors due not only to the architectural feat it represents, but also to the dramatic staging it provides. When two persons use the opposed staircases at the same time, they can see each other through window openings but never cross paths. Just like countless château guests over the centuries, tourists take undisguised pleasure in the game.

The layout of the facades

Just like monuments of Roman antiquity such as the Coliseum and 14th-century Italian buildings (the Quattrocento), the overall design of the Chambord château facades is eminently readable from the outside. The inhabitable levels are visually separated by a molded frame, or body molding, running horizontally across the entire facade. Vertically, the rhythm is given by the flattened-out pillars, or pilasters, on which the bands appear to be resting. The layout of these elements forms an Italian-style grid pattern, which is immutable in its regularity. It is within this framework that different types of openings are embedded and endow the facade with its modular appearance. While these formal or aesthetic concerns were previously evidenced in other Val de Loir abodes (Chenonceau, Blois, Azay-le-Rideau…), the geometric design of the Chambord château is unique, having been necessitated neither by uneven terrain nor by the conserved remains of earlier buildings.

Early Renaissance edifices (1420-1500) are decorated with ornamentations drawing inspiration from the decors of the palaces of Toscane and Milan. Pilasters, medallions, candelabras, and decorative foliage (rinceaux) pervade the facades, the gable roofs, the chimney stacks… In the château of Chambord, these components are assembled with astonishing virtuosity and unabashed freedom with regard to formal technique, thereby subverting Italian traditions and adapting them to French taste. The finesse of the sculptors’ work is remarkable. With their elegant swirls inhabited by picturesque figures, the foliage motifs form leaf-like structures intertwined in the capitals of the central staircase. As for the more elevated sections of the château, of which the proliferation and the verticality remain markedly Gothic, they are adapted to the setting and enriched through revived ornamental vocabulary successfully integrating (but without superseding!) the local traditions.