In Chambord, enter a world out of the ordinary, permeated with mystery, thanks to the unique architecture imagined for the glory of François I, with the spirit of Leonardo da Vinci hovering over.

Placed on the first list of historical monuments in France in 1840, and a UNESCO World Heritage Site since 1981, Chambord is one of the most amazing constructions of the Renaissance. Far from being a residential palace or a hunting lodge, Chambord embodies a true utopia: that of a brilliant work of art that has yet to reveal all its secrets. In Chambord, you will discover an ideal place, made of harmony and modernity. Because preserving the heritage of mankind is not a fixed attitude, but on the contrary, a perpetual questioning to make it sensitive to the largest public. Thus, each year, new developments and projects are presented to visitors and a rich program of cultural events punctuates the seasons. 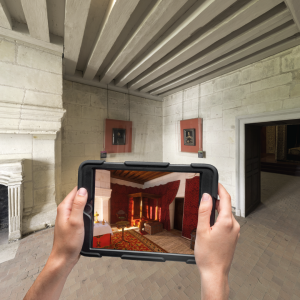 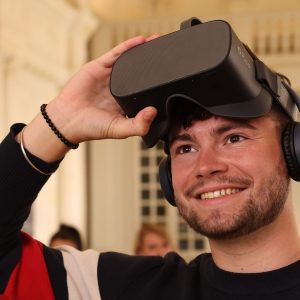 Christmas in Chambord
To visit Chambord is to enter a world apart, full of mystery, which opens the doors to genius.

From the moment you cross the 32-kilometer-long surrounding wall, as you enter the heart of a world apart, to the moment you come face to face with the genius architecture imagined by Francis I and the inspiring artist Leonardo da Vinci, it is an incomparable impression that seizes the visitor. Then, each visitor is invited to compose his or her own itinerary on the entire estate, from the Place Saint-Louis to the castle’s terraces, including the royal dwelling, the 18th century kitchens, the Ormetrou vineyards, the permaculture vegetable gardens, the Maréchal de Saxe’s stables, the formal gardens and the Grand Promenade!

1519. A palace emerges in the heart of the marshy lands of Sologne. François I, a young king, ordered its construction. It is a monumental architectural work that the king likes to show to sovereigns and ambassadors as a symbol of his power, written in stone. The plan of the castle and its decorations are designed around a central axis: the famous double revolution staircase, inspired by Leonardo da Vinci, an ascending spiral that leads from the first floor to the terraces on which the Lantern Tower culminates.

The end of the works in the 17th century

It was not until the reign of Louis XIV that the building was completed. It was also at this time that the castle’s surroundings were developed. Stables were built outside the castle and the river Cosson, which crosses the park, was partly channeled to clean up the site. The Sun King resided several times in the monument in the company of his court. Molière even presented his most famous comedy, Le Bourgeois gentilhomme, for the first time at Chambord on October 14, 1670, in the presence of Louis XIV and the court.

In the eighteenth century, work is undertaken to develop the interior of the castle. Louis XV used it to house successively (between 1725 and 1733) his father-in-law Stanislas Leszczynski, king of Poland in exile, and the Marshal of Saxony, as a reward for his military victory at Fontenoy (1745). The need to bring warmth and comfort to the building led the various occupants to permanently furnish the castle and to have the apartments fitted with woodwork, parquet floors, false ceilings and small cabinets.

During the Revolution, the castle was looted, the furniture was sold but the monument escaped destruction.

In the 19th century: a private castle

Chambord knew a period of abandonment before Napoleon donated it in 1809 to Marshal Berthier in gratitude for his services. Berthier only stayed there for a short time and his widow quickly asked for permission to sell this large residence in poor condition. The Chambord complex was then offered in 1821 by a national subscription to the Duke of Bordeaux, grandson of King Charles X. The political events that led to his exile did not allow him to live in his castle, which he named “Count of Chambord”. He only discovered his estate in 1871 during a short stay in which he wrote his famous “Manifesto of the White Flag” which led him to refuse the tricolor flag, and thus the throne. From a distance, however, the Count of Chambord was attentive to the maintenance of the castle and its grounds. He had the estate administered by a steward, undertook major restoration campaigns and officially opened the castle to the public. After his death in 1883, the estate was inherited by the Princes of Bourbon-Parme, his nephews.

20th century: Chambord, a haven for masterpieces during the Second World War

The castle and the park have been owned by the State since 1930.

In 1939, following the evacuation of the main museums in Paris, including the Louvre, thousands of works of art were sent in convoys to eleven castles and abbeys in central and western France, including Chambord. The castle, which was closed to the public, housed thousands of works of art, mostly from French public collections, in order to protect them from the bombings and the Nazis’ greed.

With 4,000m3 of crates stored in June 1944, Chambord became the largest of the 83 depots used to house works of art during the conflict. Iconic works such as Leonardo da Vinci’s Mona Lisa, Delacroix’s Liberty Guiding the People and The Lady with a Unicorn were hidden in Chambord.

Thanks to zealous curators and heritage officials, the national treasures made it through the war unscathed, turning Chambord into a museum of the imagination.

In keeping with its mission to support scientific research and disseminate knowledge, the National Estate of Chambord has been involved with the multidisciplinary research program Intelligence des Patrimoines since its inception. Hosting researchers, providing resources, participating in fieldwork, and co-producing mediation tools: there are many synergies between the teams at Chambord and those in the program’s partner laboratories.

This highly ambitious scientific cooperation has already led to a number of development initiatives. Two innovative digital mediation devices have been made available to visitors to the château for the major exhibition celebrating Chambord’s 500th anniversary in 2019, in particular an interactive 3D model of its famous double-revolution staircase to help them understand its architectural layout.

Since 2020, the Compass, a top-notch digital application, has been offering visitors an enriched walk through the new circuits of the Grande Promenade.